Easton’s story as shared by his mother, Sarah

Easton is my handsome, sweet, oldest child with short brown hair, blue eyes and olive complexion. He’s a thoughtful and energetic kid who loves math and hockey. Bed-time story time was a part of our daily routine and I could see him struggling to read on his own; even when we went to the library, he would pick out a book he found interesting but I would have to read a majority of the book to him. Sometimes, it was because of the font or text size (being too small for him).

When Easton came home with the Strong Start letter, he was in speech therapy, and had a tutor (which we discontinued later). So as parents, we were happy that he was identified for the program and was getting the help he needed to succeed. He was enrolled in the Letters and Sounds strands. He looked at the program as an enjoyable activity and even though it’s difficult to get much out of them at that age, he described his sessions as “reading and playing games”. It was important to me that Easton did not view reading as a chore, that he would learn to enjoy reading. Reading is everywhere!

The improvements have been slow but sure! The font size or text no longer holds him back. I encourage him to read books that are not only recommended for his reading level, but also the ones he has already read, to help him gain some fluency. A few weeks ago, we were watching cartoons- I think it was Batman- and I’d accidentally turned on the subtitles. I didn’t realize it until Easton pointed to the TV and said, “Oh look mom, Batman said this…” he was reading the subtitles instead of listening to what was being said.

My ‘aha!’ moment however, came last summer when we were in the children’s section at the new Chapters in Cambridge. It was a rainy day and we were sitting at a round table. I was sipping on my Starbucks latte when Easton walked up to the table with ‘Dr. Seuss’ Ten Apples Up On Top!” in hand and read the whole book cover-to-cover, on his own! He looked at me after he finished, beaming with pride, and asked if we could buy the book. Two strands of Strong Start and here we are, sitting at Chapters, and he just read a book front-to-back.

To this day, he continues to reread this book as an old favourite. 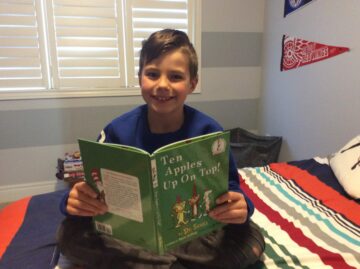