When we moved to Canada (from Budapest) over 3 years ago, it was only supposed to be for a couple of years. Napsi was only 9 months old and at that time, I’d only ever conversed with her in Hungarian. However, after coming to Canada, I began talking to her in English, unaware of the consequences of switching the language would have.

Napsugar (Hungarian for sunshine), has always been a happy and curious child but as she turned 15 months old, she wasn’t eating solid food and not attempting to talk. This prompted me to sign up for a consultation with Early Years and Zero2Six, where it was discovered that Napsi might have some speech delays. KidsAbility assessed her as a year and a half behind with her speech and language development.

By the time, the clock had almost run out on our intended 2 year stay in Canada, my husband announced his decision to extend our stay in the country. Napsi would now attend school here, and I wanted to make sure she would be comfortable enough to attend school and learn in English. At the same time, I didn’t want her to lose fluency in Hungarian, so I resumed talking to her in Hungarian. In about 4-6 months, she was speaking in Hungarian, but hadn’t made any gains in the English language. At Kids Ability, I was advised to speak with Napsi in Hungarian at home and English outside of the house….but since we spent a majority of our time at home, it was hard to gauge how well she would interact with other children at school.

I first heard about Strong Start’s Get Ready for School program through a friend. Her child had gone through the program, and was quite insistent on signing up Napsi. To be honest, I was a bit reluctant in the beginning as I believed a 3-year-old child should be playing and was not ready to learn how to read.

My intention of signing Napsi up, was to get her some help to learn and speak in English! My daughter learned so much more in the program than learning to speak in English. The first few days were tough for the both of us, since we had never been apart, but at the end of the first week, Napsi was looking forward to the class. As I witnessed how much Napsi enjoyed the letters and sounds taught in the program and the books she bought home, I realized how wrong I was about my earlier hesitation. She loves using the phrase “two more minutes” and recreating the class games at home (same and different, domestic and wild animals), where she was the teacher. I was so astonished and grateful to see the difference the Get Ready for School program made in Napsi’s life. By the end of the program, she was not only able to speak in English, but also communicate to make herself understood. Her confidence in her language, social skills and independence soared and it still continues to grow.

One of the biggest surprises for me occurred when Napsi said to her instructor Caroline, “Mommy and I took the bus today…because daddy took the car.” In that moment, Caroline and I knew that Napsi had received a gift of English, a new language. This moment left Caroline and I beaming with pride and I felt personal relief from my worry. I would like to take a moment to thank the Get Ready for School instructors. They were so attentive and receptive to my daughter; she was a hugger back then and the instructors would reciprocate Napsi’s way of greeting and hug her back.

I will continue to recommend the program to everyone I know. I am grateful to having had all these resources and helpful people on my journey from being a worried mother, to being an involved person with my child’s language development. 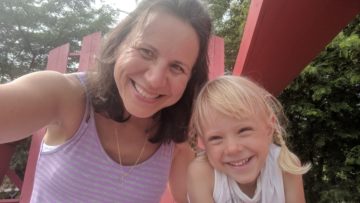