I have now had two children complete the Get Ready for SchoolTM program.  My son last year and my daughter this year.

I was nervous putting my son in the program last year. It was his first time away from me for anything like this. I was worried he was going to have issues leaving me and feel uncomfortable being put in a new environment with strangers. Ashley was there that day and did an amazing job of reassuring me that he would be fine. I reluctantly left, fully expecting a call within half an hour to come and get him. Not only did he make it through that first day, but he came home full of stories and eager to share what he had learned. This continued every single day he was in the program. It was amazing to watch my child get such enjoyment out of those few hours away from me and come home proud to share and teach what he had been shown.

This year, signing up my daughter for the program, I had no worries. I felt confident that she was not only going to learn her ABC’s, but she was going to make some new friends and really build her social skills. So again, I had a child coming home excited to show off the new sounds and words she learned. On the days they were given new books to bring home, she would come prancing through the door, holding the book in the air proudly, showing off her new trophy.

Every morning when she woke up, she would ask me if she had “school” that day and was always disappointed when it wasn’t a “school” day.

I am very happy that both my children had the opportunity to participate in this very beneficial program. I know they have both gained the necessary skills in order to better prepare them for Kindergarten. I have seen my son enter school this year and have the confidence to participate in class immediately. Not only because he learned his sounds, but also because he understood how the classroom operates and what is expected of him as a student.

I have nothing but positive things to say about the Get Ready for School program and the warm, caring, and educated staff who made the journey possible for my children. 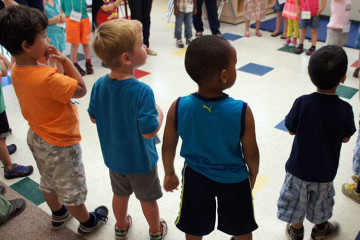