Children’s literacy program ready to scale up
by Paul Knowles

We’ve all heard the African proverb, “It takes a village to raise a child.” Well, the Waterloo Region-based program Strong Start has quantified the concept – with Strong Start, it takes 2,872 volunteers, 380 charitable donors, and about 55 full- and part-time staff to start a child on his or her way to their best educational experience. Or, to be fair, thousands of children.

The program – officially “Strong Start to reading” – claims a simple but profound goal: “Making a difference in the life of a child.” This is accomplished through several specific programs, but the underlying concept is, volunteers or paid staff members work with young school children and pre-school kids to help them learn to read – and in the process, to improve their self-esteem, confidence, and ability to function in the educational system.

Machelle Denison is Executive Director of Strong Start; she was the first full-time staff members with the organization, coming on board in 2010, nine years after Strong Start was launched as a community project. It was created through the shared vision of Lyle S. Hallman and Lynda Sylvester, both of whom have passed away.
Denison explains that Hallman wanted to create a program in which “volunteers help young children learn to read. This impacts their school life, life in general, and the community.”

Retired elementary school principal Lynda Sylvester played a key role in creating and rolling out the program – it’s now one of three Strong Start programs, today branded as “Letters, Sounds and Words”. It started in one Kitchener school – today, the program is offered in over 280 schools, says Denison, through eight school boards in four Southwestern Ontario regions.

“You can’t measure the confidence boost or self-esteem that comes from working for 10 weeks with a caring adult. But we know that impact is huge. The children believe in themselves as a learner.” She adds that the program has helped over 3,900 children learn to read, the result of 45,000 hours of volunteer time.

Strong Start offers three programs under its umbrella – Letters, Sounds and Words; Get Ready for School; and Baby Connections. The first is offered to children in senior kindergarten and grade one, kids who need what Strong Start describes as “a literacy boost”. The program is offered by trained volunteers who work with the children, one on one.

Get Ready for School is a program including 44 classes, offered by paid Strong Start staff members, for preschoolers in the six-month period prior to starting Junior Kindergarten. It is held in community centres throughout the region, and according to Jean Stacey (photo right), who is program coordinator for the Letters, Sounds and Words program, it is especially effective with children for whom English is a second language, and for children from lower-income homes.

Baby Connections is offered in collaboration with KidsAbility and other community organizations. The goal is to offer parents and caregivers coaching and literacy resources to use with their infants to support brain development and lay the groundwork for language and literacy development.

Strong Start programs were inspired by need, a need that continues to present itself: “quite a disparity in literacy levels” among children entering the educational system, according to Denison. She adds that, in the last school year, there were 45 different first languages represented in Waterloo Region schools.

This need for literacy help – and the attendant benefits of one on one relationships between children and trained adult volunteers – has meant that Strong Start is on what Denison calls “quite an ambitious growth trajectory.”

The Strong Start team knows their programs are working. They know it through the stories told by the volunteers, the staff, the kids, the families, and the educators in the schools where the programs are held. But they are not content with anecdotal evidence. Stacey told Exchange that every child in the Letters, Sounds and Words program has a pre-assessment, to determine their literacy level; then they participate in the 10-week program, which sees them out of the classroom for one-on-one sessions with a volunteer; then there is a follow-up assessment.

And that’s how they know, says Stacey, that “the gains are really significant.” Their findings indicated “excellent or outstanding results” with an astonishing 95% of the children.

These assessment results are compiled by school, and presented in reports to the principals of each elementary school in which Strong Start operates.

But Stacey quickly points out that some of the most important results cannot be measured. “You can’t measure the confidence boost or self-esteem that comes from working for 10 weeks with a caring adult,” she says. “But we know that impact is huge. The children believe in themselves as a learner. That spreads over all areas of the curriculum.”

Denison lists some other benefits of the programs, including preparing the pupils for acceptable classroom behaviour and relating to other children; and to ease the problems of “separation anxiety” for the pre-school children… and for their parents!

The Get Ready For School program is offered in neighbourhood community centres – while Strong Start provides everything except the physical space – and Denison says this is also a plus: “Because it is neighbourhood based, many of the children will end up going to school together, as friends.”

She adds, “the parents make friends, too,” as they bring their pre-schools to the neighbourhood centres.

One in four kids

The need is huge. Denison says, “One in four Canadian children struggles to learn to read.” There are governmentally-sponsored programs for a few of those kids, but many, she says, “do not qualify for other times of literacy support.” Strong Start will be there for an kindergarten or grade one pupil who needs the program.

Some of the challenges are obvious – the number of kids for whom English is a second language, for example. Other challenges are newer, and less well understood.

It has been discovered that young children who spend time in front of screens – computers, tablets, smart phones, and even television – struggle with literacy.

Denison says that experts “are noticing a shift in the developmental level” of young children, caused by “the introduction of technology at a very young age.” It has been discovered that young children who spend time in front of screens – computers, tablets, smart phones, and even television – struggle with literacy. Experts in the field are actually recommending that children under the age of two be given “no screen time”.

Stacey adds that too much screen time is proving to be a vocabulary deterrent, and Denison says, “Children are coming in [to school] who don’t know how to play.”

Both women immediately add, “There is no technology used in presenting the Strong Start programs.” Stacey adds, “the key components are based on games and activities. And the one-on-one attention the child receives from a caring adult.”

Stacey brings a personal perspective to Strong Start. “I’m also a volunteer in the program. I may be the only person all day who can take time to listen to the child.”

It’s clear that volunteers are essential to the Strong Start programs, as is funding from donors. In addition to the almost 3,000 regular volunteers, say Denison, companies often offer a team of staff members to volunteer for a day or half a day, to work in the warehouse assembling kits for the programs, for example. Denison says this is all essential to “keep out costs down.”

She knows the costs right to the penny – asked about Strong Start’s annual budget, she smiles and answers very precisely: “$1,113,332.”

About 80% of their funding comes from foundations, led still by the Lyle S. Hallman Foundation. The rest comes from donations by companies, individuals, service clubs and through a few third-party fundraising events.

The program, which started in Waterloo Region, now reaches children in many parts of southwestern Ontario. Strong Start is now working with school boards including Thames Valley and Brant-Haldimand-Norfolk. A Strong Start caucus has been founded at Queen’s Park, hosted by Speaker of the House Ted Arnott. There are current 14 MPPs who have signed on “to help us make introductions to their communities.” The Executive Director says that the 10-year goal for Strong Start is to be serving 100,000 children a year. She adds, “Every community in Ontario needs Strong Start.” 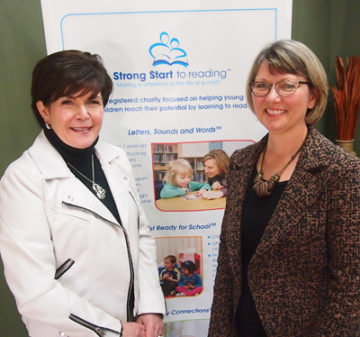